Why I refuse to say ‘Happy Holidays’ 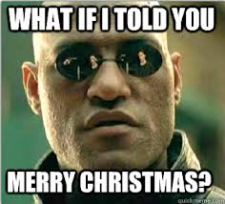 I refuse to say ‘Happy Holidays’…

Yes, you read that right, I refuse to say the generic seasons greeting, “Happy Holidays” this year, and come to think of it, forever more during the Christmas season.  I will say to everyone I greet, “Merry Christmas!” with a big cheery grin, no matter who I am speaking to.  I don’t care if you are not a Christian. I don’t care if you are Jewish, Muslim, Buddhist, Hindu, a whining Atheist or are from the planet Neptune. I will still say, “Merry Christmas!” with a big cheery grin even if you state you don’t celebrate Christmas. You may think that is being insensitive and politically incorrect in this day and age, but I do not think that by me, or any other Christian, wishing someone a “Merry Christmas!” is being insensitive or even offensive at all. I believe it does quite the opposite. It does what it was meant to do. It expresses kindness and joy.

Let me explain by giving an example. Say you moved to India, or Iran, or Brazil, or Neptune for a year and during that year while you were hanging out with your new foreign friends their big holiday came up.  Now would you feel included and accepted if they expressed their happiness of the season by stating their favored expression, “Merry Sacred Cow day!” or “Happy Buddha’s birthday!” or “Happy Neptune monster day”… whatever? Wouldn’t you be happy to be included in their joyous time by having them express their happiness to you in their favored statement? Or would you be offended because you’re not Buddhist, Brazilian or Neptunian? No, of course you would be open to and would enjoy experiencing their holiday and all the happiness that goes along with it, wouldn’t you? Wouldn’t saying, “I don’t celebrate that and I’m offended!” be rude?

Okay, here’s another example. Back in the early 1990s I worked as a bartender in the Chinese Restaurant “Joyce Chen” in Boston’s Theater district. I was one of only a few Caucasians working there.  I enjoyed working there and learned to speak a couple of phrases in Cantonese. I loved learning about the traditions and celebrations of my Chinese co-workers and friends. During the winter months (January/February) they celebrate the Chinese New Year. Now this is a big holiday, a huge celebration for these people and during this time they taught me how to say, “Happy new Year” in Cantonese, if I remember correctly it is, “Gung He Fat Choy” or something like that. Every member of the Joyce Chen staff would wish me this greeting and invited me to their big celebration at the restaurant. I felt accepted and happy that they wanted me to be part of their special time. They could have just thought, “Oh, she’s not Chinese, why should I wish her a ‘Gung He Fat Choy’? She’s not one of us.” But they didn’t do that, they reached out to me, and invited me to celebrate with them, and I thought that was awesome.

And that, my politically correct friends, is why I believe expressing my season greeting in the traditional way, “Merry Christmas!” (for it IS the Christmas season), is right and good and wonderful because it is embracing and sharing with the whole world my joyful time.  I am not “shoving my religion” down non-Christian’s throats. I am not trying to convert (well, I do try to evangelize). I am just sharing joy. That’s it. By stating “Merry Christmas” to everyone I come across during this time I believe is showing them how much I care, that I want to share this happiness, this joyful time of year. How can saying this be offensive or insensitive if what I am doing is greeting them in a joyous way and wishing them peace and good will? It doesn’t make sense to be “offended” by happiness unless you have a mental disorder.

Now, I know what you’re going to say. Not all American’s celebrate Christmas; and some people celebrate other December holidays, so by saying “Happy Holidays” to whomever you bump into, you are covering all your bases. Okay, that is true, not everyone celebrates Christmas, you’re right. But how many is the question? There are Jewish people who celebrate Hanukkah (it is early this year, it started November 27 and goes until December 5th). Hanukkah is cool, I used to watch my Jewish friends light the menorah when I was a child and loved being part of it. As for what Jews think of Christmas, I don’t know about the whole group, but I have heard from some Jews that they love Christmas and all the joy that goes along with the season, they don’t find hearing, “Merry Christmas” offensive at all. I also asked my Atheist friend about the statement, “Merry Christmas” and he also was not bothered by it either.  And not to make any less of this “Festival of Lights,” but this holiday is not the big Jewish holiday of the year. Yet Christmas IS one of our big holidays (Easter should be our biggest). Besides Hanukkah, what other holidays are there? Hhhmmm… I know one person that celebrates the “Winter Solstice.” But how many celebrate that? Not many. So what is left? Aaaaah, Kwanzaa… don’t get me started… but you know what? Most people have absolutely no idea, not only what this “holiday” is, but its origins.  For one thing it is NOT an African holiday. And it is only 40-odd years old. A paranoid, racist, torturing (yes he was all those!) criminal (yes he was a convicted criminal… he tortured, yes, TORTURED women!), Ron Karenga formed the radical violent (yes violent) group the “United Slaves” (a rival to the Black Panthers) back in the early sixties and thought up this fake holiday a black alternative to Christmas.  I personally find the story of the man who started this holiday to be horrific and disgusting and cannot accept or embrace this holiday as a real holiday at all. But that’s just me, I have principles.

So, that brings me back to Christmas, the biggest holiday of December. What IS Christmas?  We all know that it is the celebration of Jesus’ birth … so what is Christmas about? Look at all those Christmas cards, the words they use are: Joy, hope, peace, happiness, and good will, to name a few.  What do we do during Christmas? Reach out to one another; wish each other happiness and joy and good will. And we give, not only gifts but many people give to charities and spend time helping the less fortunate have a Merry Christmas. That is what Christmas is. It is something precious, something good in a world gone mad.

We all know this. But still, for the past several years (decade!) there has been a war on Christmas. Many American towns ban Mangers, or Christmas trees or candy canes, or caroling (our town’s parade is called “A Very Derry Holiday Parade” ugh) …  any and every expression of the Merry season is banned all in the name of political correctness in mortal fear that one person MAY be offended. It’s all quite Orwellian, how you must watch what you say, the Thought Police are watching. God forbid you say “Merry Christmas”, you could be fired for being insensitive and “offending someone”.

But aren’t you offended by this nonsense?  How many American’s celebrate the Christmas season in some way? What do you think? Fifty percent? Sixty? Seventy?  No~ 96%! Read that again: ninety-six percent! That’s a lot! So, who are the teeny tiny minority who do not want us “intolerant” (yes I have been called that!) to “push” our Christmas on them? Who are the whining Humbug Scrooges who don’t like to have someone wish them a warm happy greeting?  Really, that’s what they are and they have gone too far. I am offended and I am going to do something about it.

So, that is why I will forever more express my happiness of the season with “Merry Christmas!” I have already wished several retail workers and grocery store clerks a “Merry Christmas” and you should have seen the smiles on their faces and they greeted me the same way. Awesome!

And so the season starts and so the war continues and so I finish this by stating:
“Merry Christmas to all, and to all a jolly good fight!” 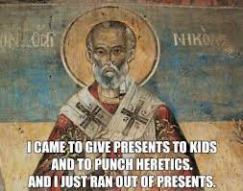 Well, … to be honest… it is not Christmas… it’s Advent… Christmas doesn’t start until Christmas day… ha! Seriously. Keep your tree up until the Epiphany (or The Baptism of the Lord!)

Precious Fool
Create a free website or blog at WordPress.com.